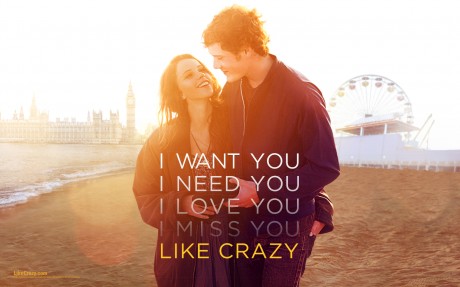 I watched a sad film last night. I haven’t written a film review in a long time but had to write something about this one as it did cause an impression. It’s called ‘Like Crazy’ (Starring Anton Yelchin, Felicity Jones and Jennifer Lawrence, Directed by Drake Doremusand, 2011) and it’s about a British girl who is studying in the US and falls in love with an American boy. She decides to overstay her student Visa and spend the Summer so they can be together. When she goes back to see him she is barred at the airport due to her previous Visa violation. That’s when all problems begin, as it is impossible for them to be together. They both try to move on with their lives but really can’t. They end up seeing other people, getting back together and getting married, and yet still have their visa denied… There is a period of giving up, seeing other people again, but still the memory of that person and that impossible love is always present. In the end the bureaucratic problems are resolved and they are reunited but it ends up being bitter sweet, as so much crap had happened in the meantime, unnecessarily. If you watch it I think you’ll understand what I mean by this.

It showed all the things I am always scared of – arriving at immigration in the US and not being allowed in, going to an interview at the embassy and being denied the processing of the visa, the wear and tear the distance and the problems cause to a  relationship. Nightmare inducing stuff, really.
I would have probably been able to appreciate the film more as a film if it didn’t seem like they were telling the story of my life and about a chapter that is still yet to be resolved. I will bless the day I have a green card in my hand and I can live with my husband in the same country. Anyway, it’s not a bad film and the acting is decent but if it wasn’t for all the personal issues about it it wouldn’t have made such a big impression on me.

I am now off to watch some comedy.

Charity shop finds (and some more)

Remembrance of things past