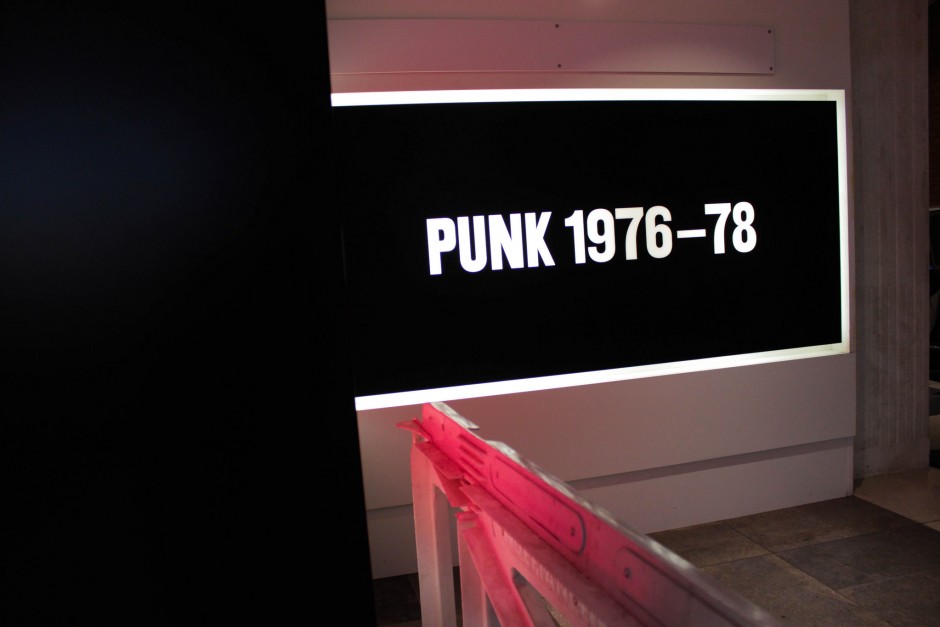 … just getting older and going to bed at a much more reasonable hour. This funny meme comes to mind as I go through the photos of the latest British Library exhibition: Punk 1976-1978. I was invited to attend the press preview and we all had a guided tour by one of the curators, Steve Cleary who was kind enough to guide us through the glass cases and impart some knowledge on the items on display. 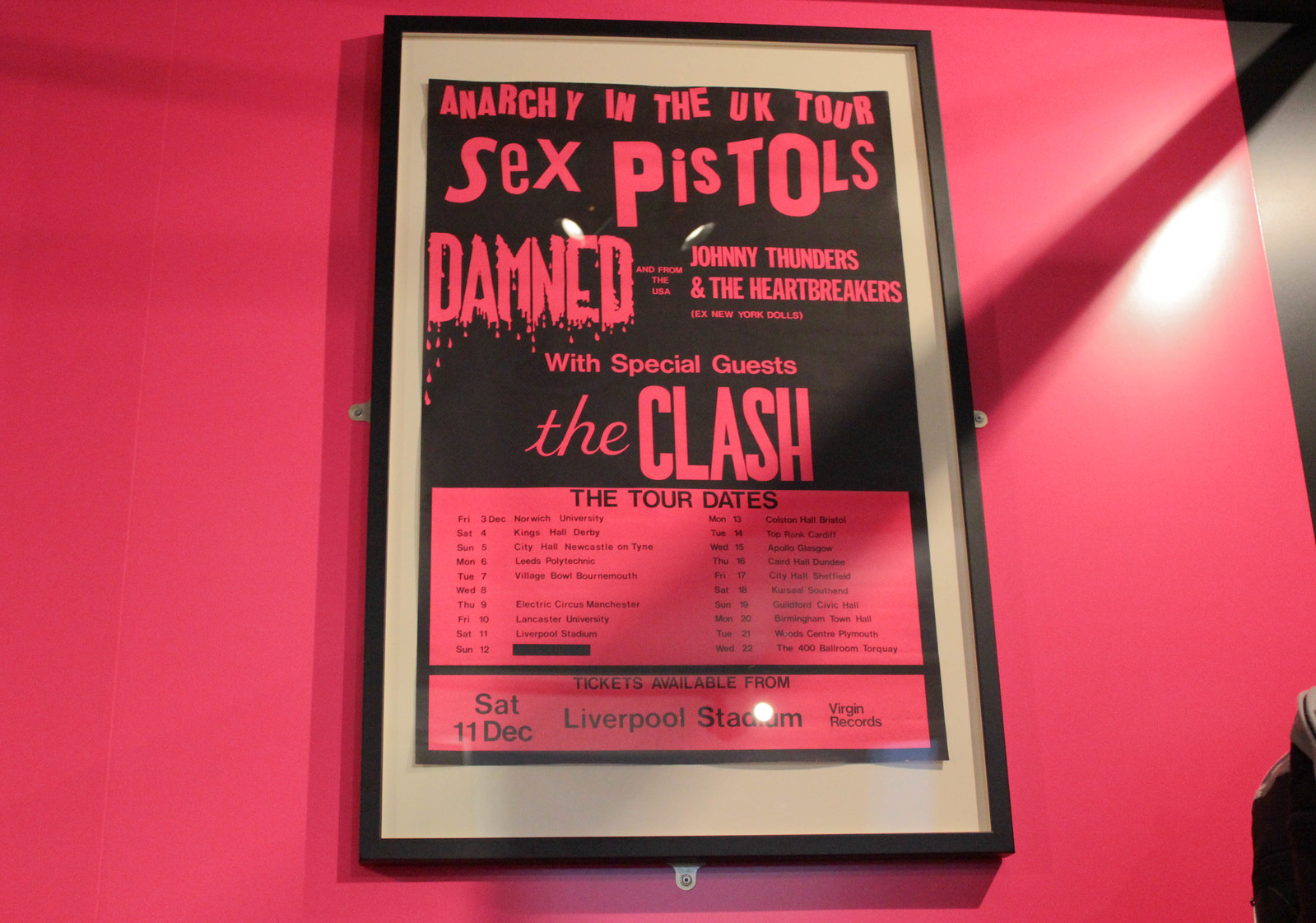 This exhibition is my teenage self’s wet dream, seriously. All the big names such as The Clash, Sex Pistols, The Ramones, Siouxsie Sioux and everybody else in between is represented in some way – all the bands I used to listen to when I was a kid (and sometimes still do). Punk is now 40 years old and in this exhibition, we are taken on a tour of the first couple of years of its inception. We’re given the chance to see not only pieces straight from the British Library’s vaults but also others on loan from private collections, which means that we probably won’t have the opportunity to see them again – another good reason not to miss this. 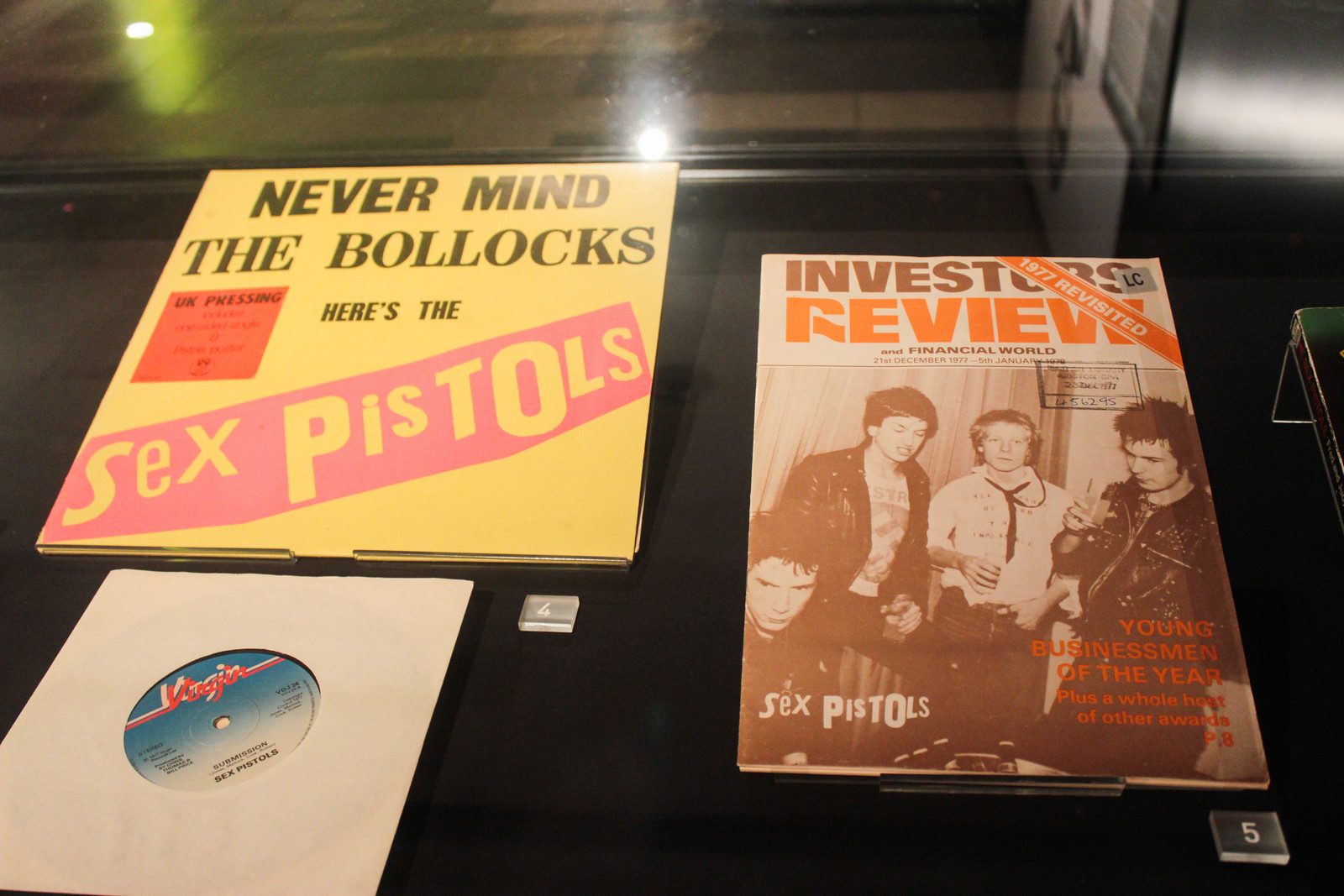 -One of the funniest things on display: a copy of Investors Review magazine, declaring the Sex Pistols as Young Businessmen of the Year. This was due to the amounts of money they were given as a golden handshake by record labels, who were keen on getting rid of them, troublemakers that they were.- 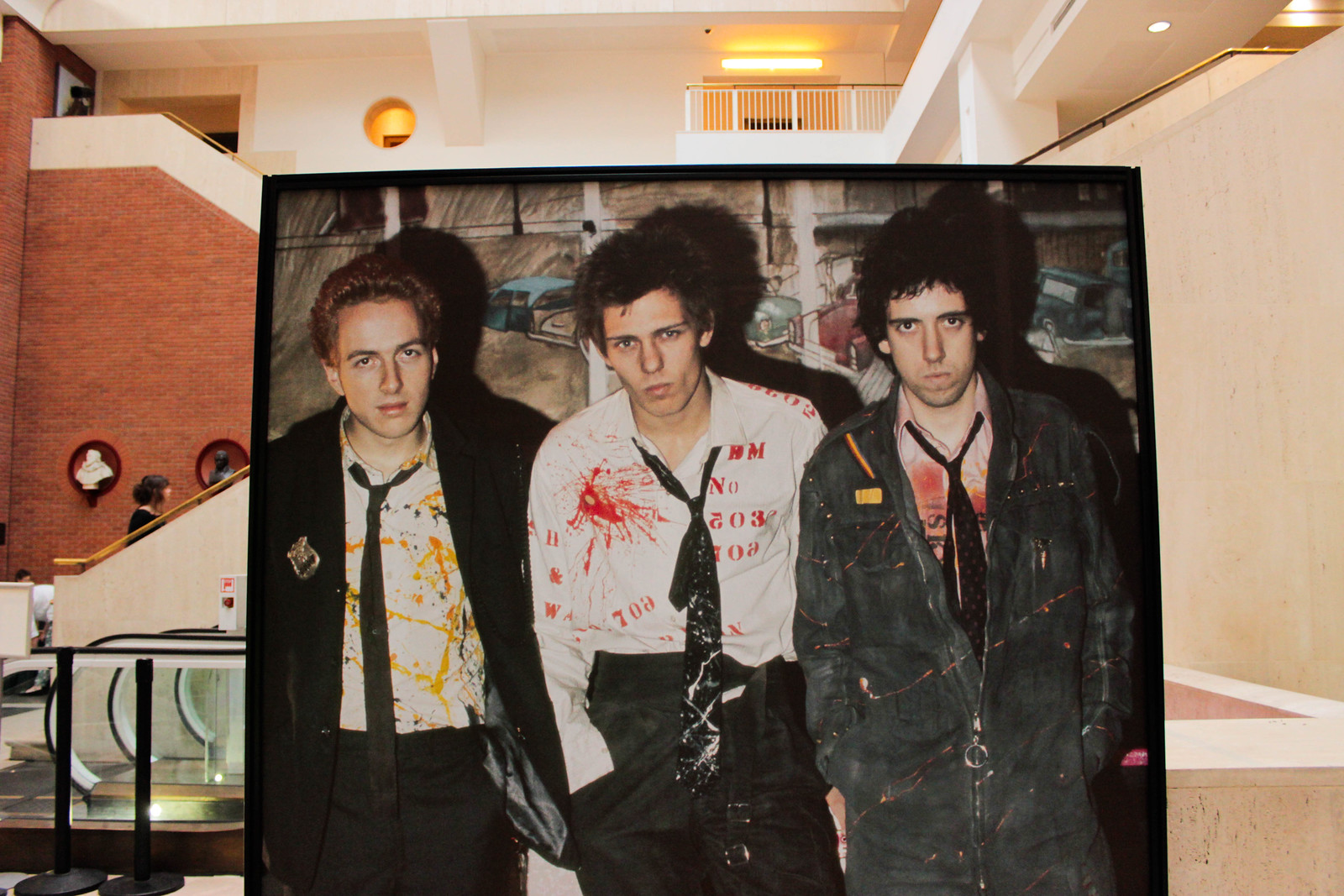 -A very big photo of The Clash. (Remember I went to their pop-up shop a couple of years ago?)- 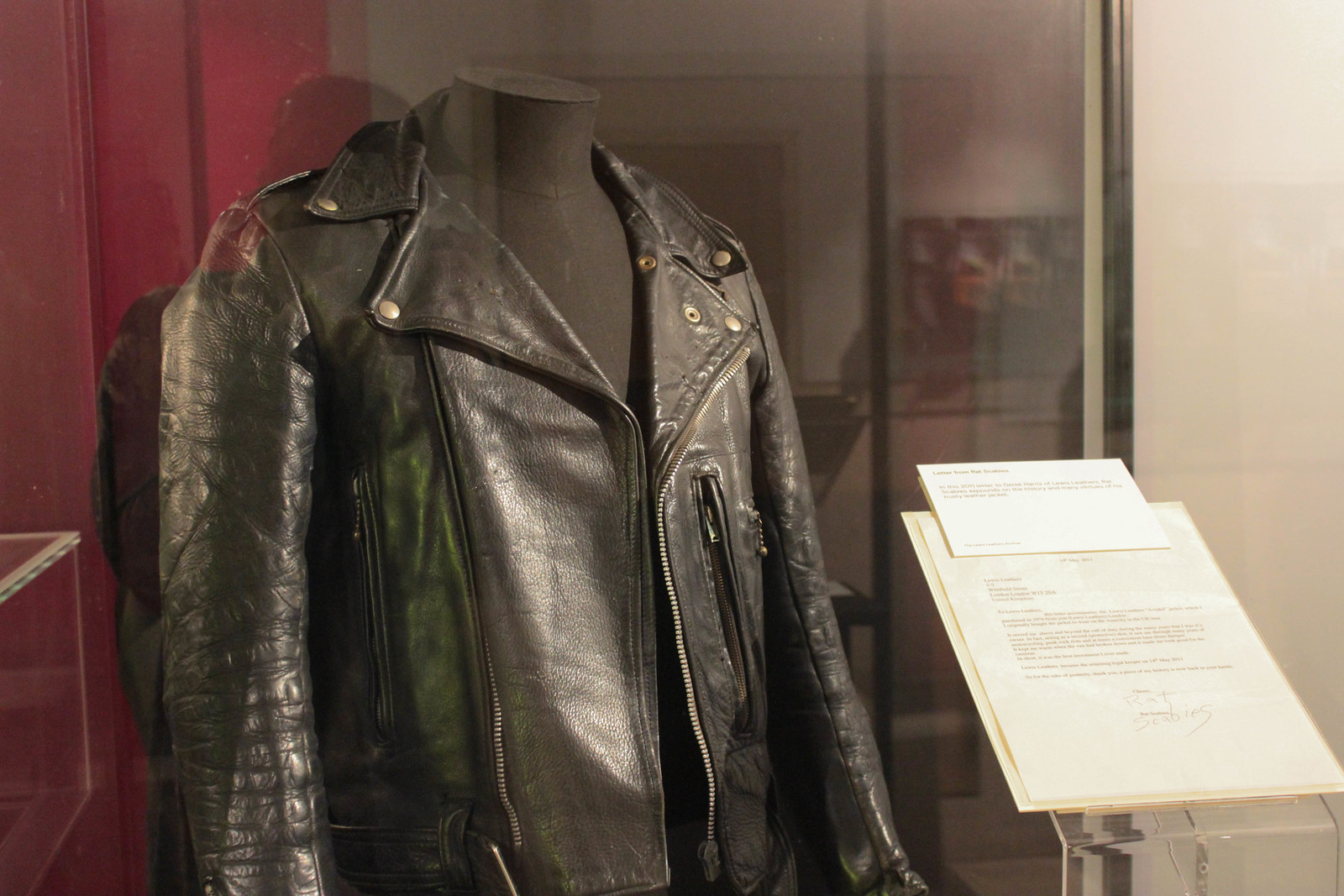 There is a wide variety of artifacts on show: videos (when the Sex Pistols swore on Bill Grundy’s show on live TV), records, flyers, posters, zines and even Rat Scabies‘ leather jacket (along with a letter certifying that said jacket was his inseparable companion through many punk rock riots, motorcycling days and a lot of rock and roll). See Jamie Reid’s photo inspiration for the God Save The Queen poster, issues of NY-based Punk magazine and various situationist books are all there, giving us a great insight into the creatives responsible for punk. 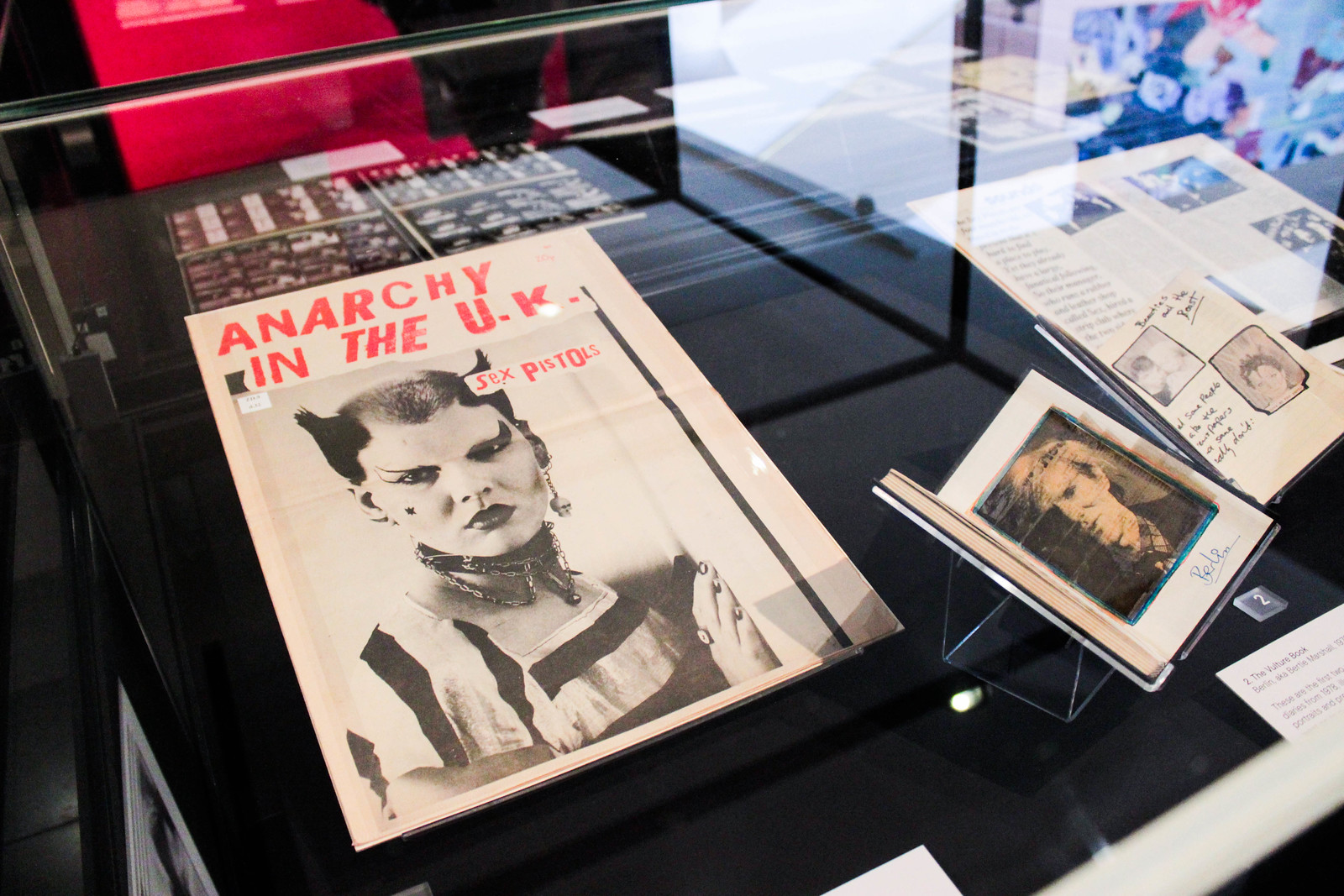 -Soo Catwoman was a punk icon and her image endures the test of time – still iconic! Ever wondered what happened to these people?–

This isn’t meant to be an exhaustive analysis of the Punk movement but a good sample of how things started, to show the influence the movement had in subsequent years, an influence that remains until today in the graphic arts, fashion and music. The infamous boobs or the naked cowboys t-shirts Vivienne Westwood was selling out of her King’s Road shop Sex are all there – originals and now worth thousands of pounds. 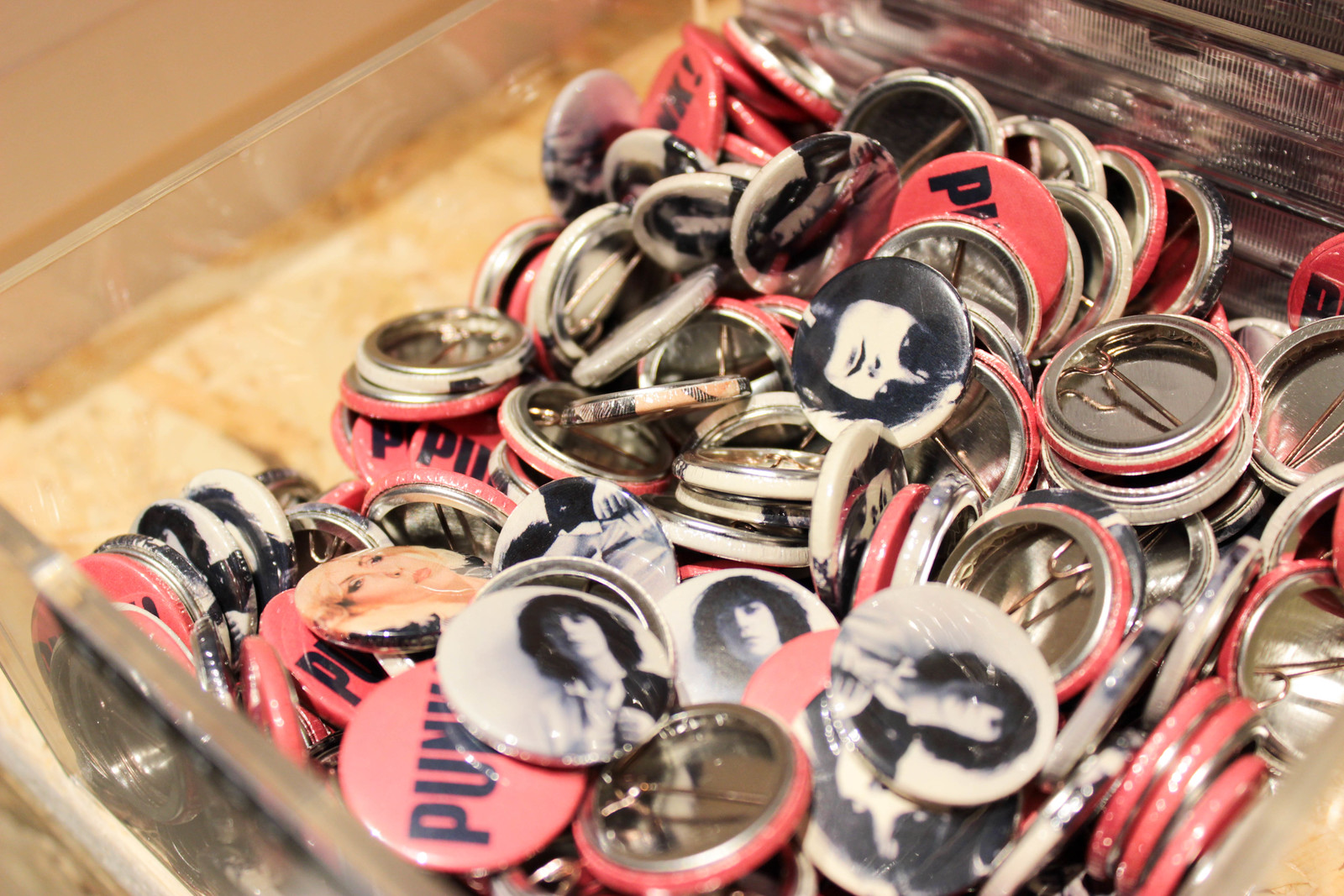 Which reminds me of a bit of news I’ve read recently – as the mainstream establishment is adopting punk as part of British culture, Joe Corré (son of Vivienne Westwood and Malcolm Maclaren) intends to burn his collection of punk memorabilia worth £5m as a protest. I’d say give it to me instead, I’ll make good use of it, haha. But I understand where he is coming from, I really do. 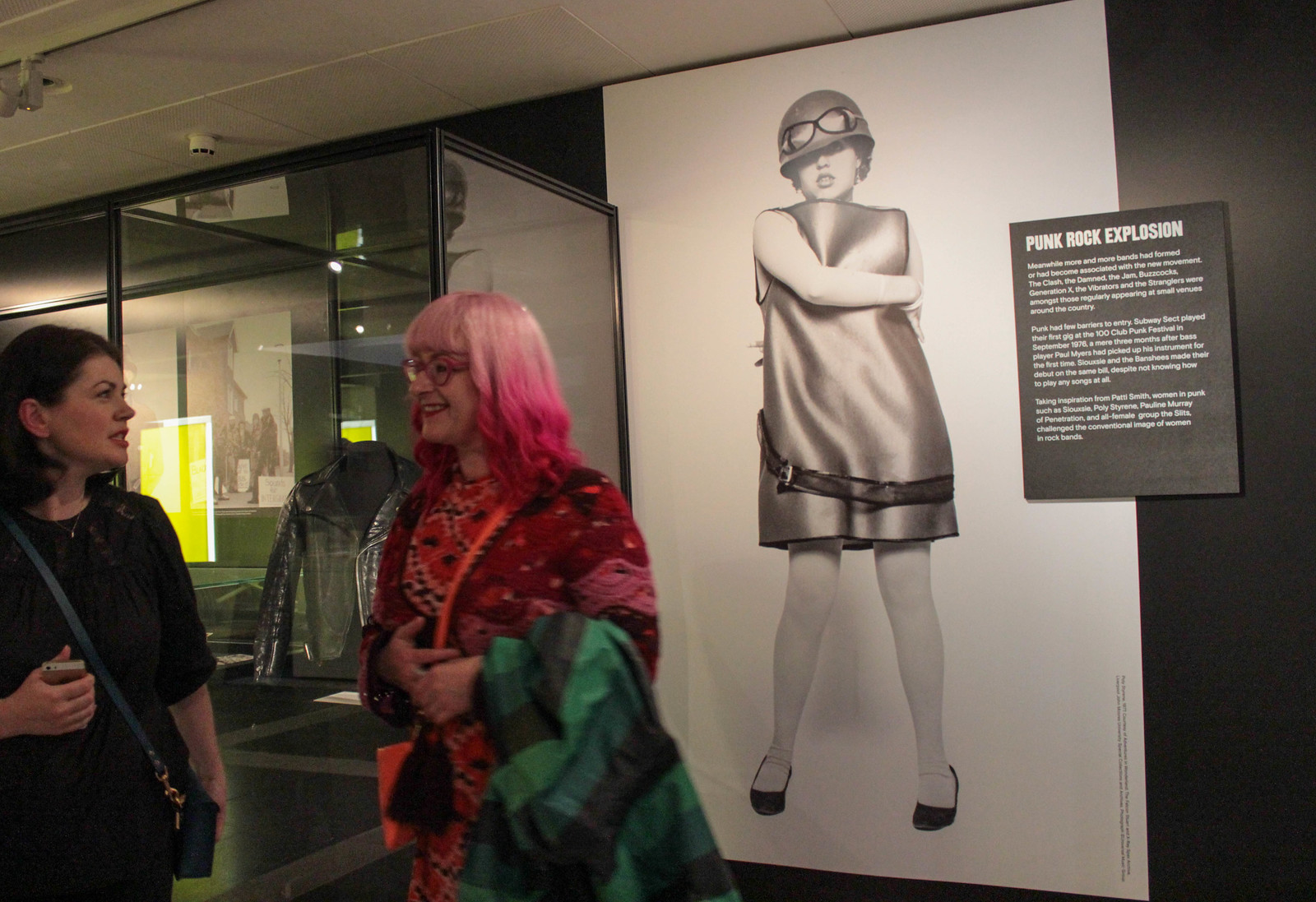 -The lovely yet badass Poly Styrene. I’ve always thought she had great style.-

A movement that espoused DIY against installed corporations and was rebellious in nature is now being co-opted by some of the most traditional figureheads of our society. In a way, this is what happens to any underground movement, eventually. Well, maybe not so much as other musical genres such as power electronics or industrial (Throbbing Gristle, for example) but one can understand the appeal of punk rock. The punk tribe’s visual identity was at times scary (mainly to old ladies, but still…), creative and irreverent – something that also appealed to me as a youngster – and of course, very striking. 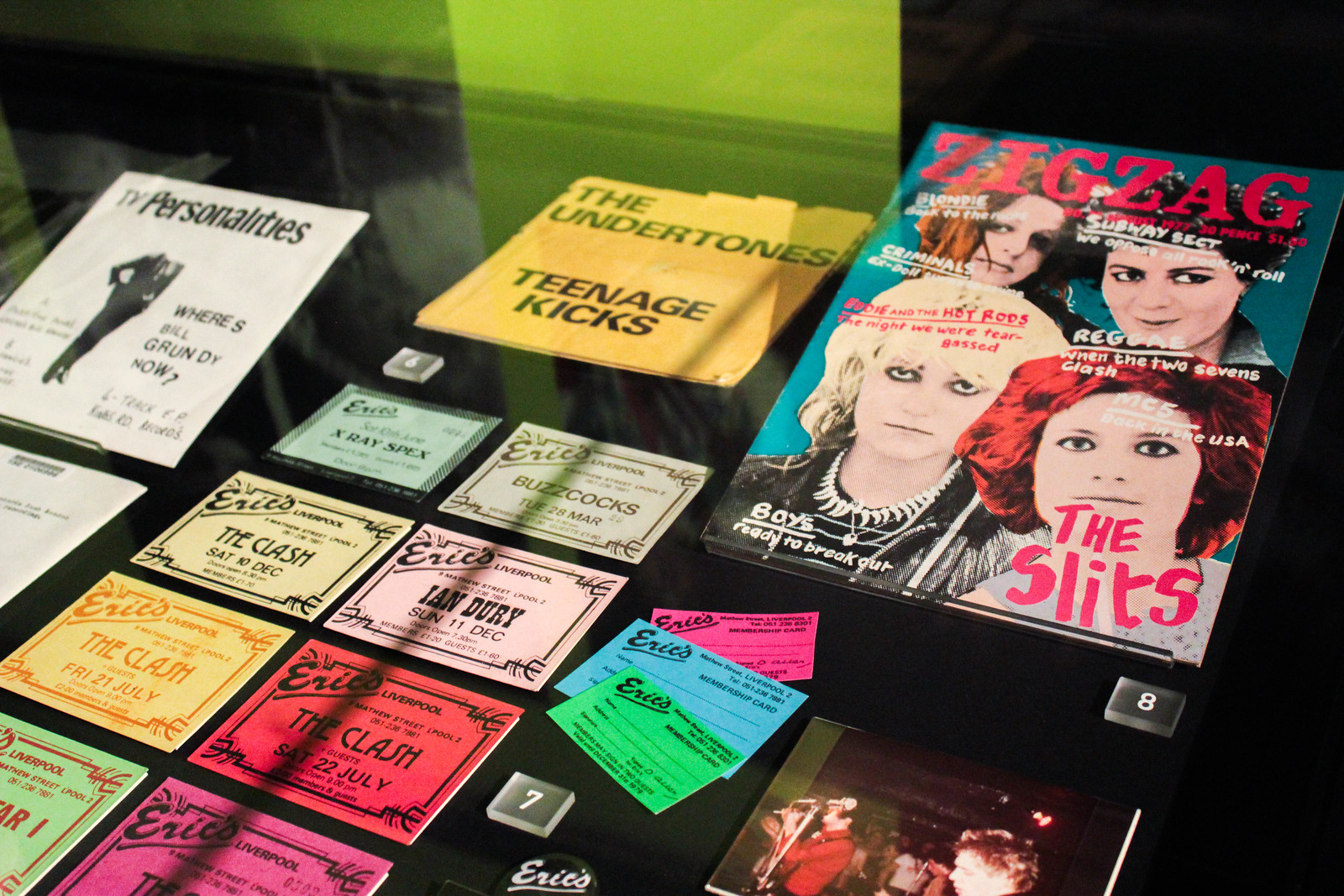 Now, it’s like your grandmother decided to start wearing safety pins through her nose and studded jackets – what are you going to do to rebel? It all seems so quaint these days. Maybe what happened to punk is the same that happened to everybody else – we all grew up, got jobs, became cynical and got rid of our mohicans. Throwing a tantrum over this would be like going back to being a sulking teenager shouting how “I just want to be different”. Maybe it is time to grow up, take inspiration from it and create new movements? I digress… 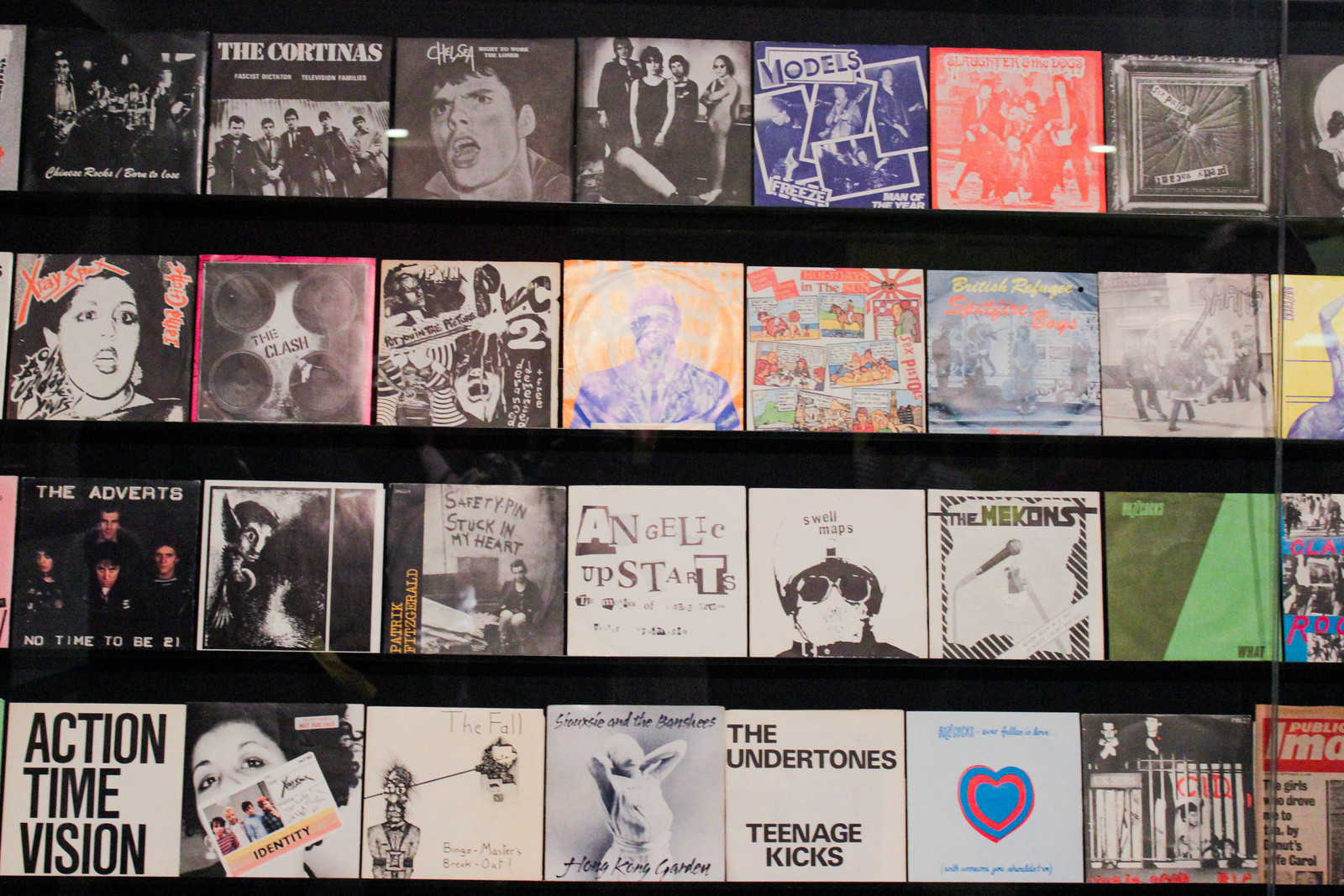 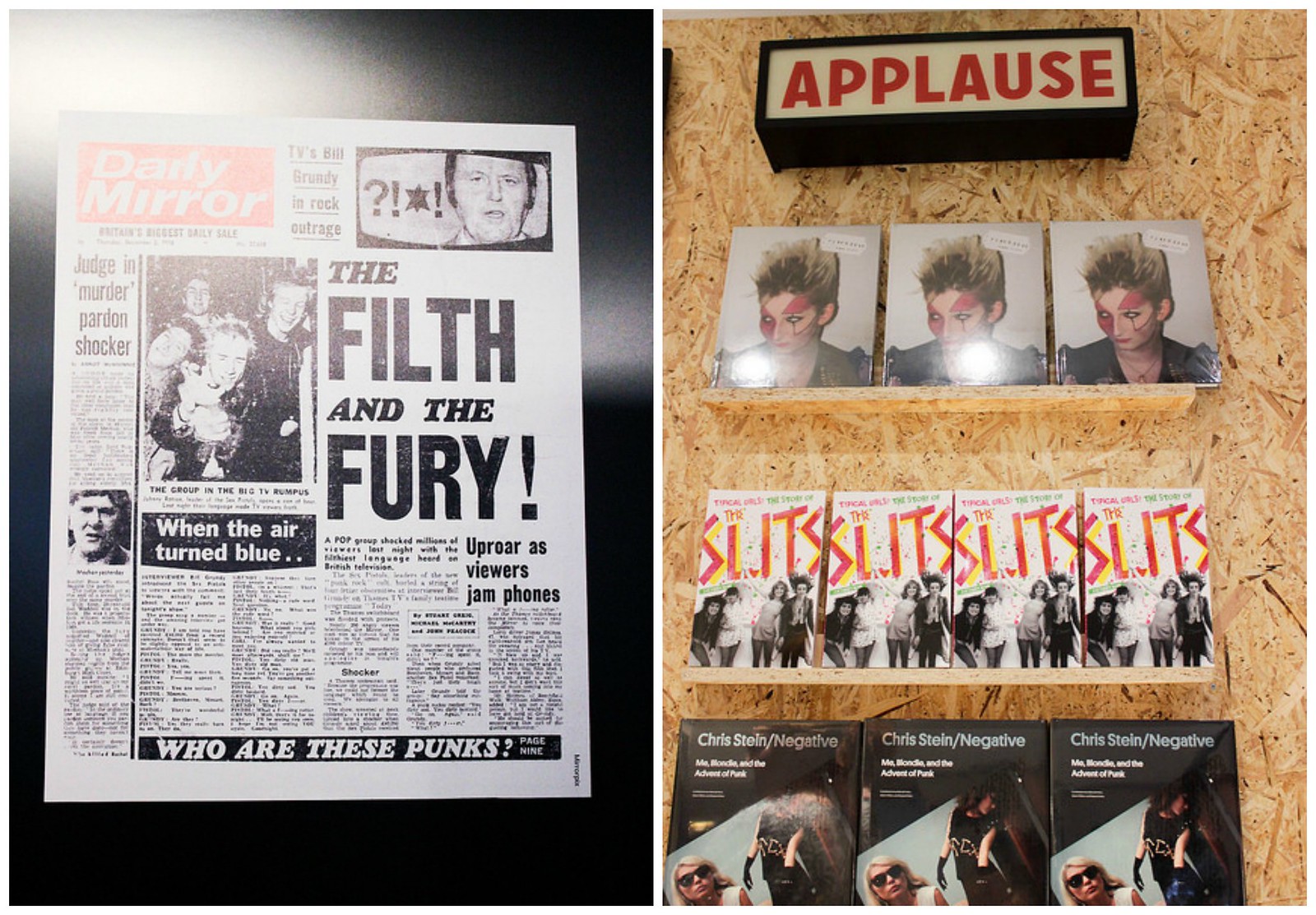 Despite the image we might have of punk as unwashed, drunken hordes of people yelling “Anarchy!” (crusty punks, I’m looking at you), not all about it was negative. There was also the affirmation of freedom and self-expression that came along with it. Punk was an inclusive movement (or at least more than its predecessors): women had their own voices and were visible (Jordan, The Slits or Poly Styrene are two of the examples on show) and there were several bands with an anti-racist message (Rock Against Racism was started in 1976 and mainly punk bands were involved in it). Finally, DIY culture started with punk – the zines, the records, the shows, the home made clothes – is another positive aspect that seeped out into the mainstream that we know today – Etsy being a good example of how DIY also became commodified but is still great for artists. I personally wouldn’t complain too much about punk ideas becoming mainstream as we can see, these are very positive aspects of it. 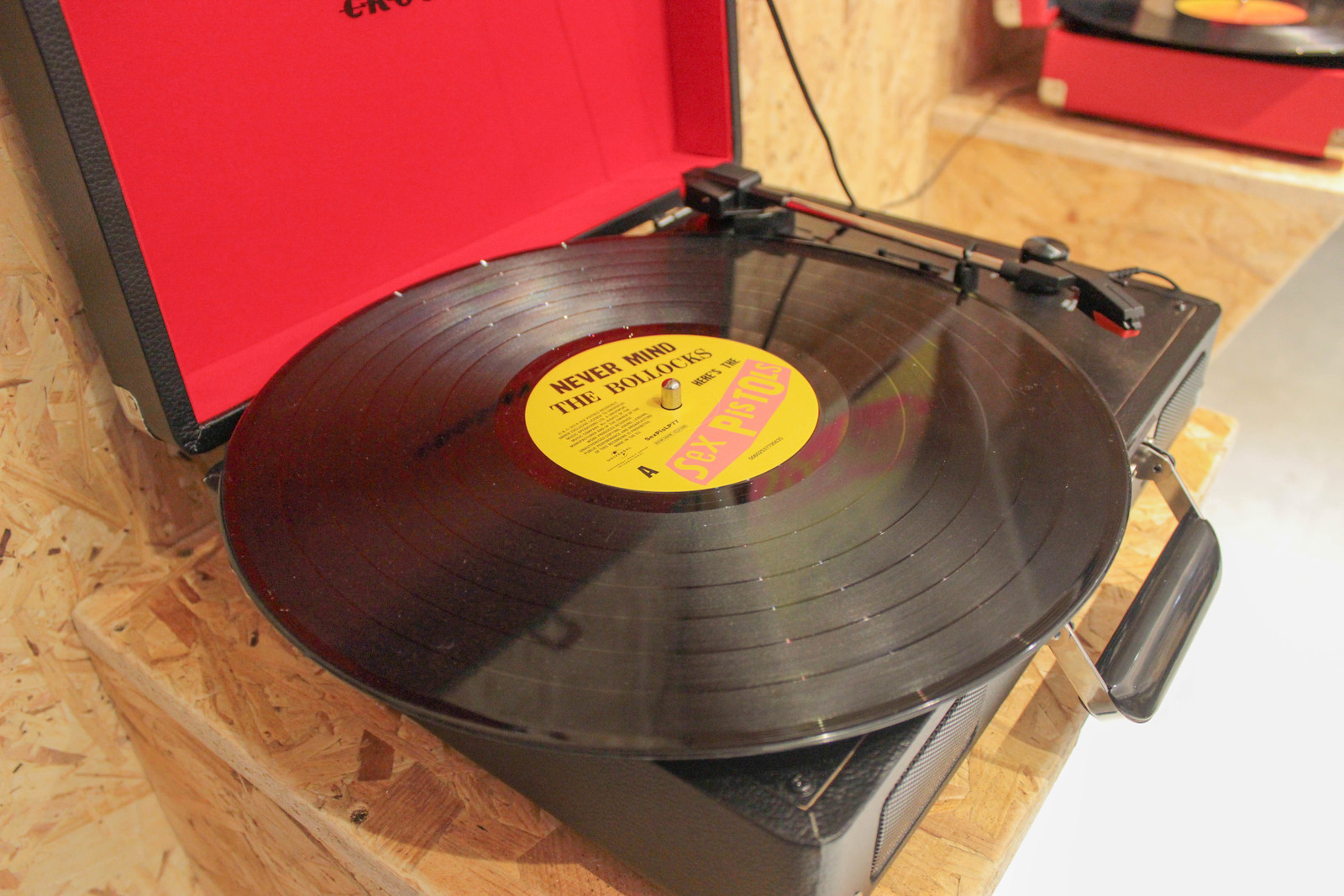 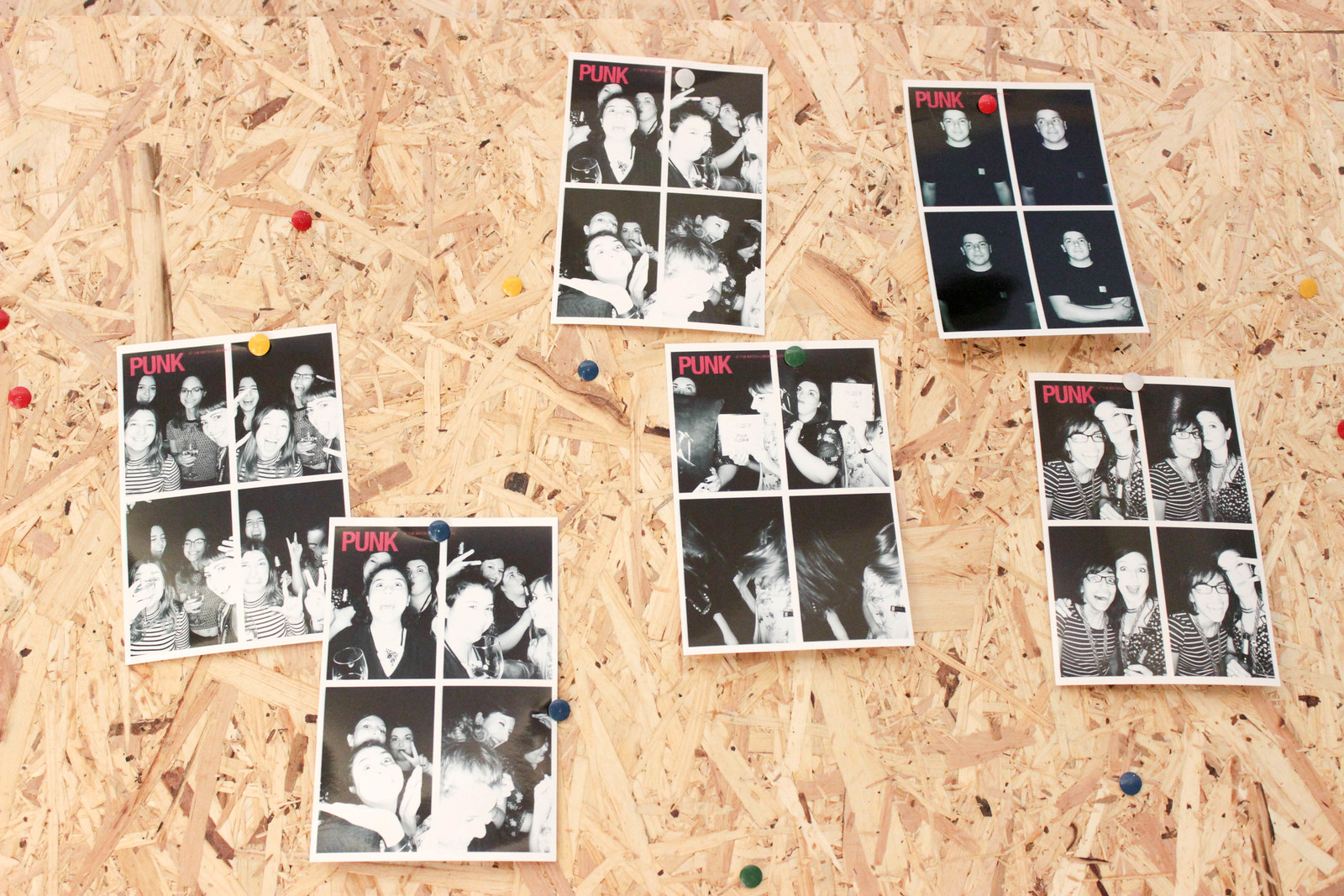 After the exhibition, we headed down to the Punk pop-up shop, filled to the brim with punk related items. There we played with the photo booth (I can’t resist those) and I was happy to see that I used to have some of the vinyl records available – back in the day when I still owned a record player and records to play on it – it was a nostalgia filled moment, I have to say. I felt like buying all the books and was sad that I live in an attic and have very little wall space, as legendary punk photographer Sheila Rock’s prints were smiling at me, begging to be purchased. 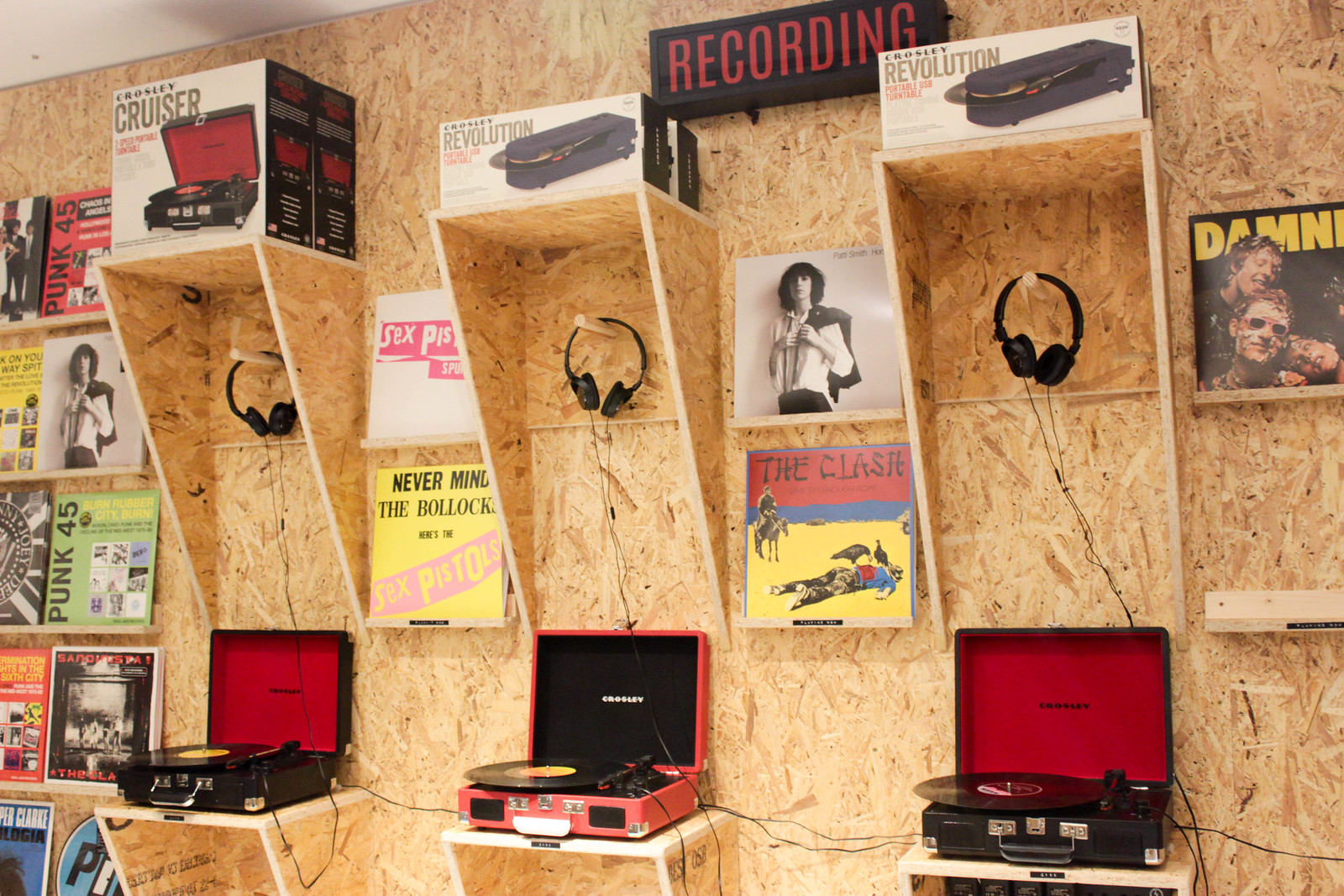 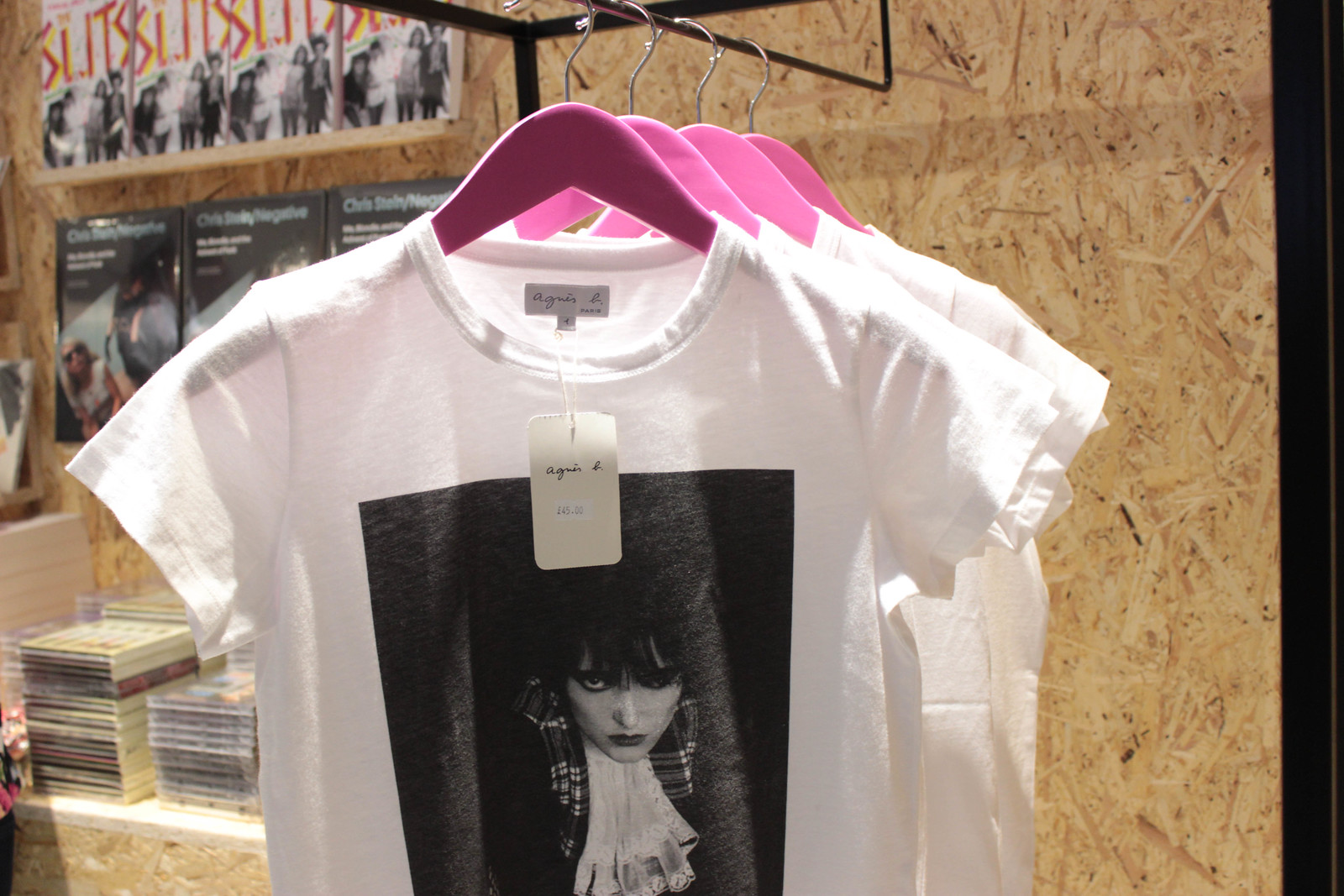 –Spellbound by this Siouxsie Sioux t-shirt.-

I had a lot of fun and recommend anyone with an interest in punk or in music in general, to come and pay the British Library a visit. I have to go back again and take my time reading all the information on the cards, there’s loads to learn.

Art – How I got into street art