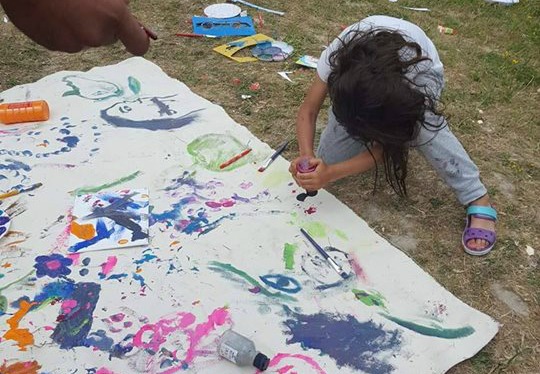 Recently a friend put me in touch with Help 4 Refugee Children and they gave me the opportunity to travel as a volunteer to Calais, to do art workshops with the children.

One might think that there are no more refugees in Calais – mostly because the Jungle has been destroyed and the media’s attention is now somewhere else… but this couldn’t be farther from the truth. There are still people living in appalling conditions – mainly in tents, in the woods, with no electricity or running water. The police come by regularly to take away the few sleeping bags and clothes they have and there have been reports of police brutality, even against children. 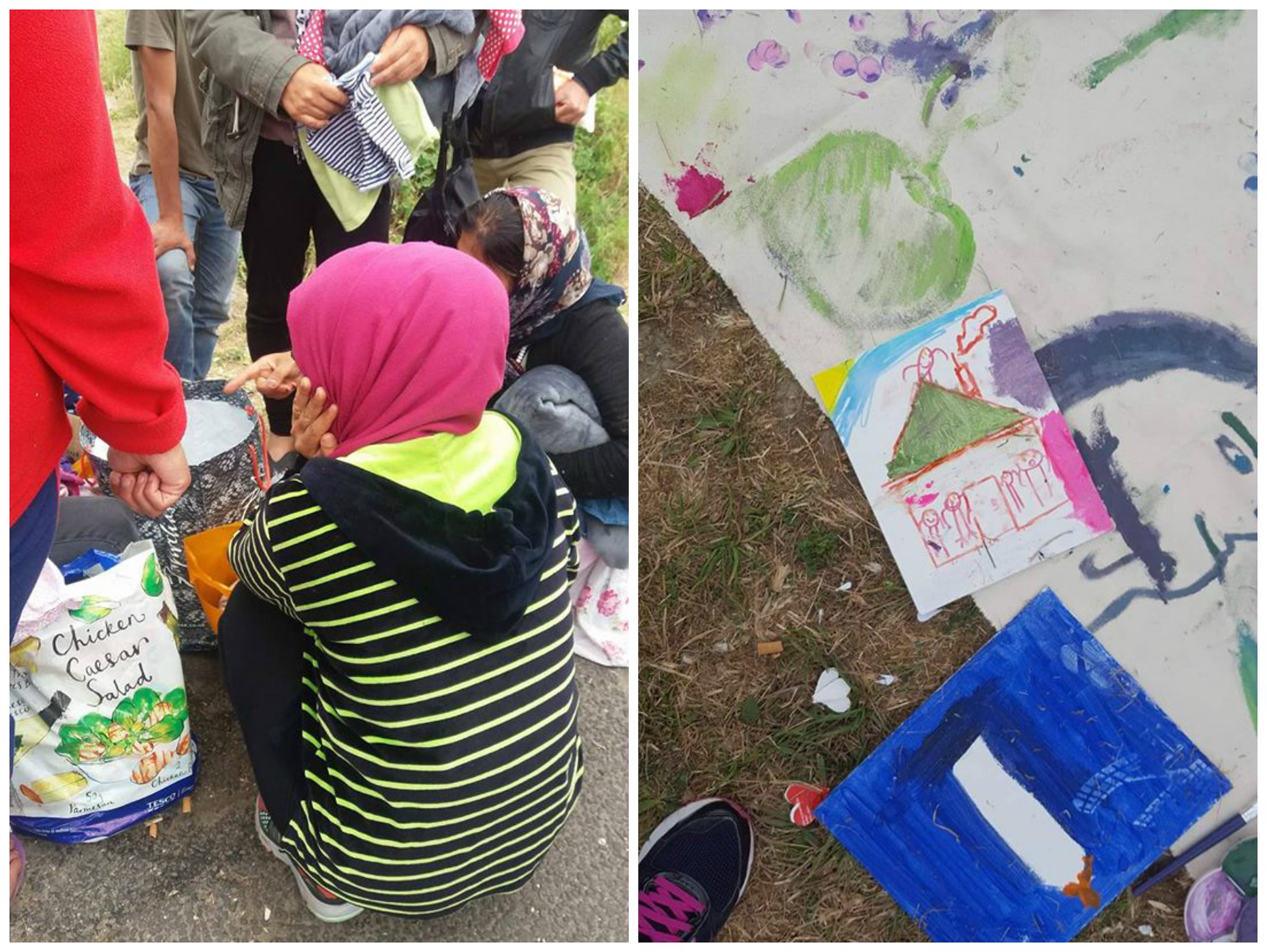 Of course, what we managed to do in just one day out there in one of the camps is only a drop in the vast ocean, but I’d like to think that at least for a little while we made a bit of a difference in these people’s lives. Our governments have failed them and failed us, by creating the conditions in which people feel the need to run away from poverty and terrorism. If we can’t or are unwilling to pressure our governments to do something about it, at least the few of us that care can roll up our sleeves and do our bit. If we all did that, a huge difference could be made.

I joined the rest of the group in the early hours of Sunday morning and we got driving south, towards Dover where we can cross the Channel. The drive down was uneventful, we had a chat and got to know each other a bit more and got on the train – a new experience as I’ve only travelled via plane or Eurostar when leaving the UK islands. 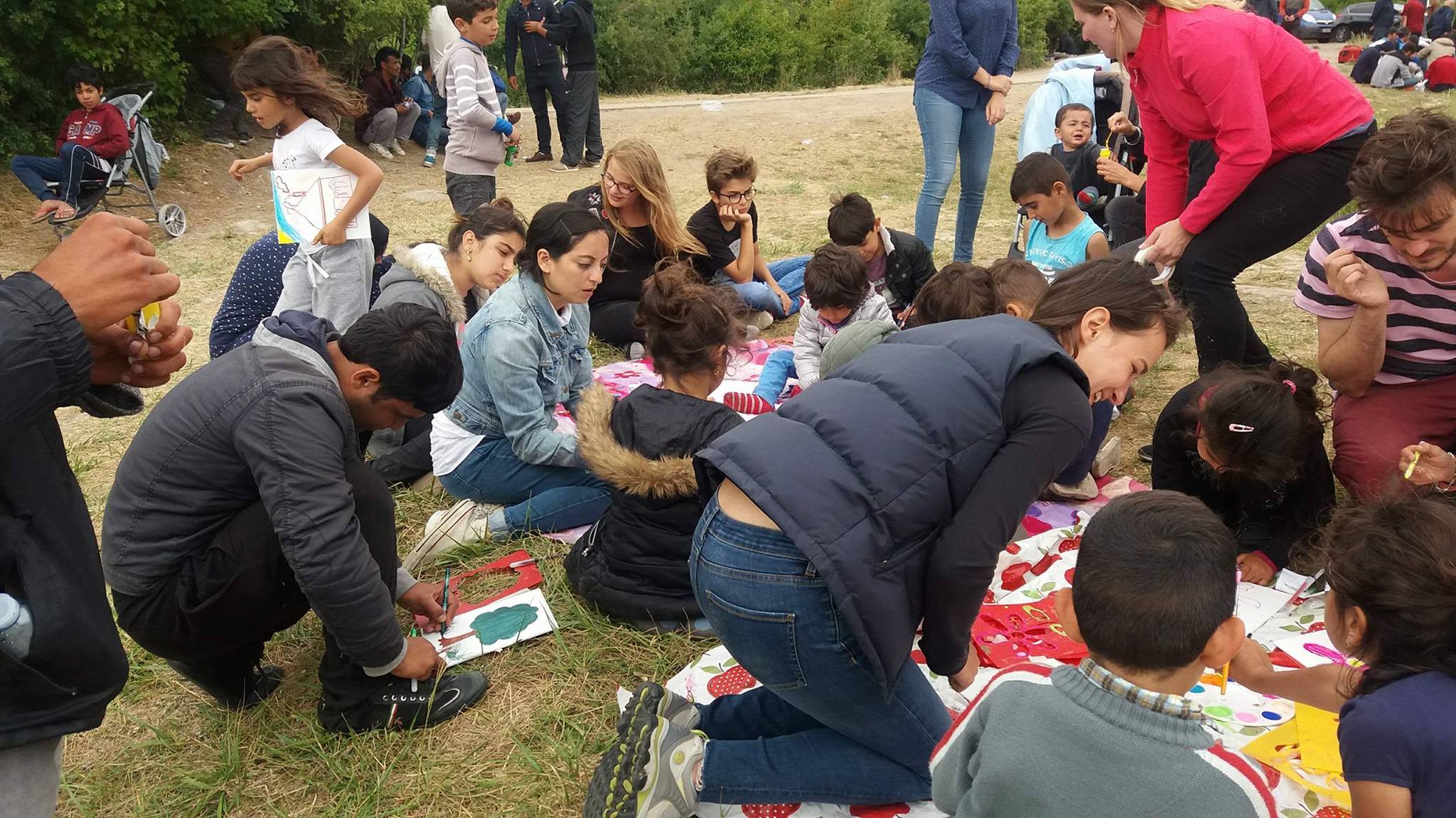 Rolling up our sleeves

Soon we arrived in Calais and headed to the supermarket, to buy water and food to distribute at the camp. After filling three carts to the brim with water, biscuits, fruit and dates, we worked on getting them separated into individual parcels in the supermarket’s parking lot. It was great teamwork and the sense of accomplishment after we finished getting all 250 parcels together was great. We then headed to the camp, where we distributed the food in the most respectful way possible. I was also happy to see that there were also other people providing some help – a generator for them to charge their phones, as well as a mobile barber and hot meals, were some of the help I saw being provided by other groups. 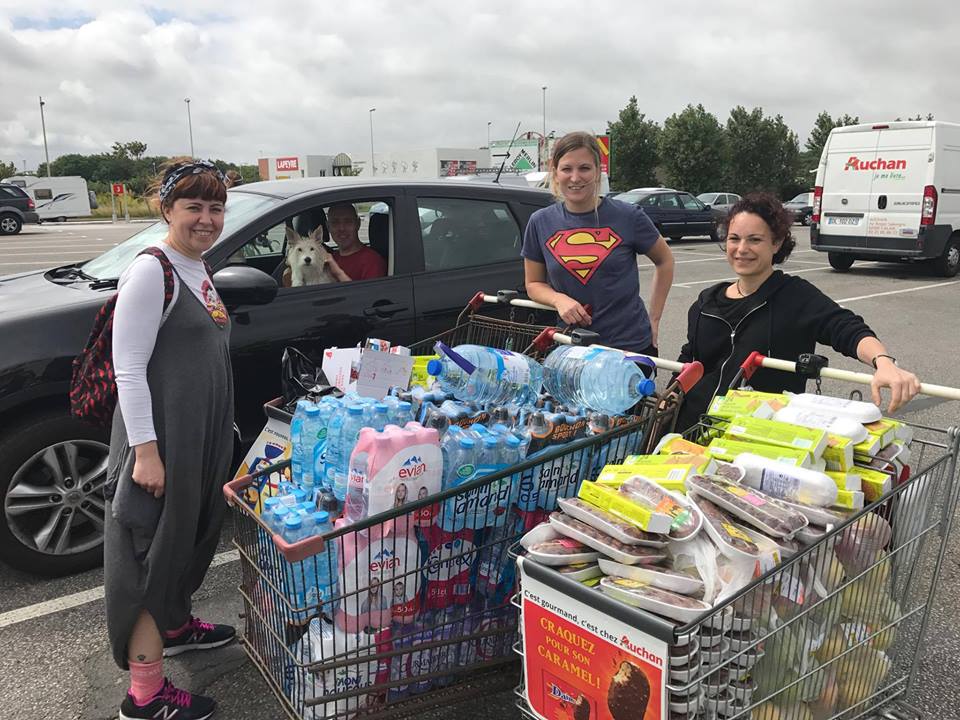 This went well and as soon as the food was gone, we brought out the paint and canvases. Turns out the adults also wanted to join us and I spent more time with the adults painting and helping some of the children do some art. It was a lot of fun and it seemed like the people were happy to have a little respite from the hardship they’re currently enduring. 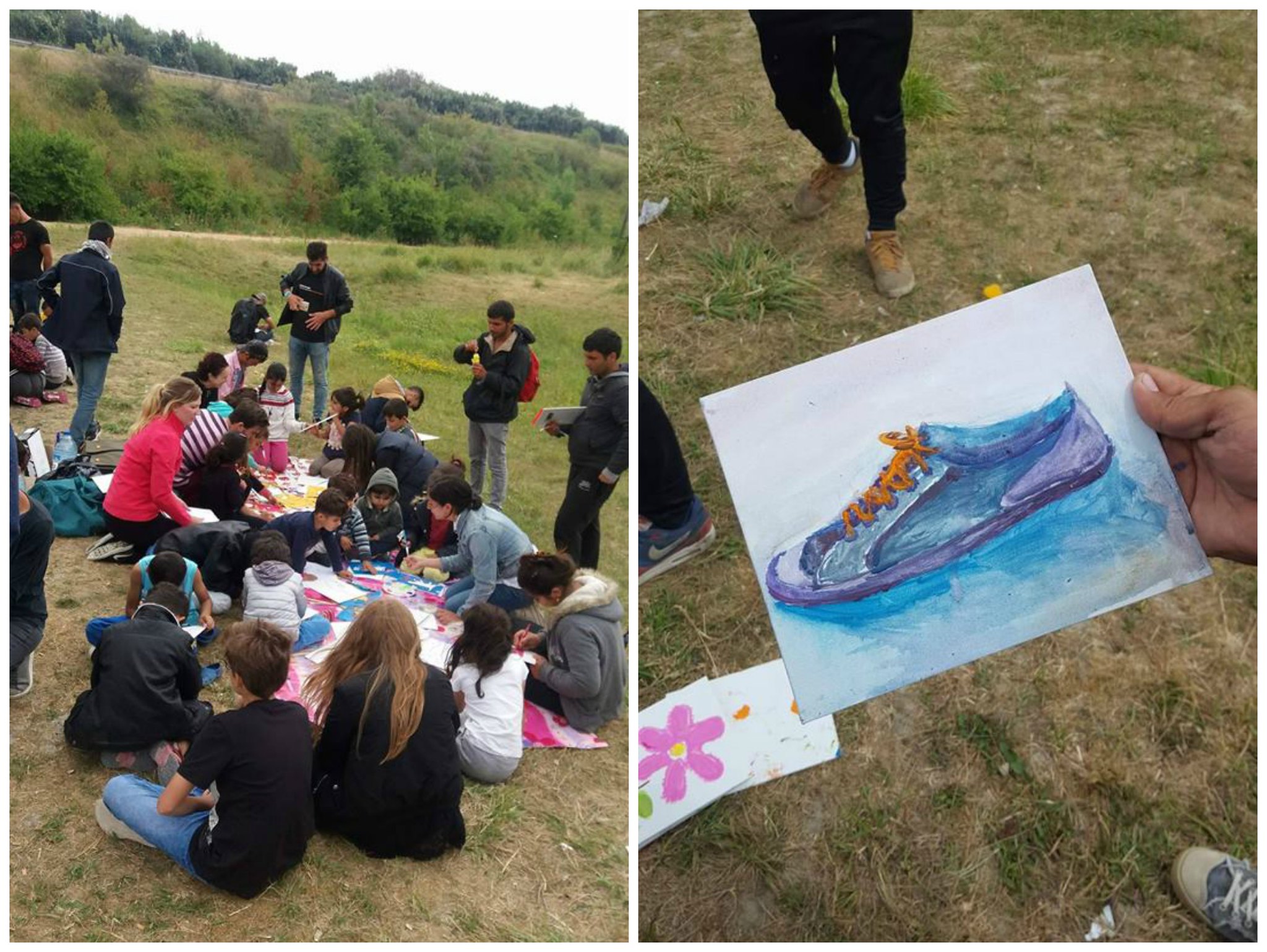 Some of the men spoke English and were very nice, so it was possible to communicate, at least with some of them. Most of the people in the camp we visited are from Iraq and are Kurdish. I met an artist – who studied art for five years and showed me his ceramic sculptures on his phone. Another gentleman created a piece by cutting stencils and using them to create a heart motif, which he gifted to me once finished. It was a very sweet gesture and I will treasure this piece for the rest of my life. Proof that even when in distress, people can still be kind. 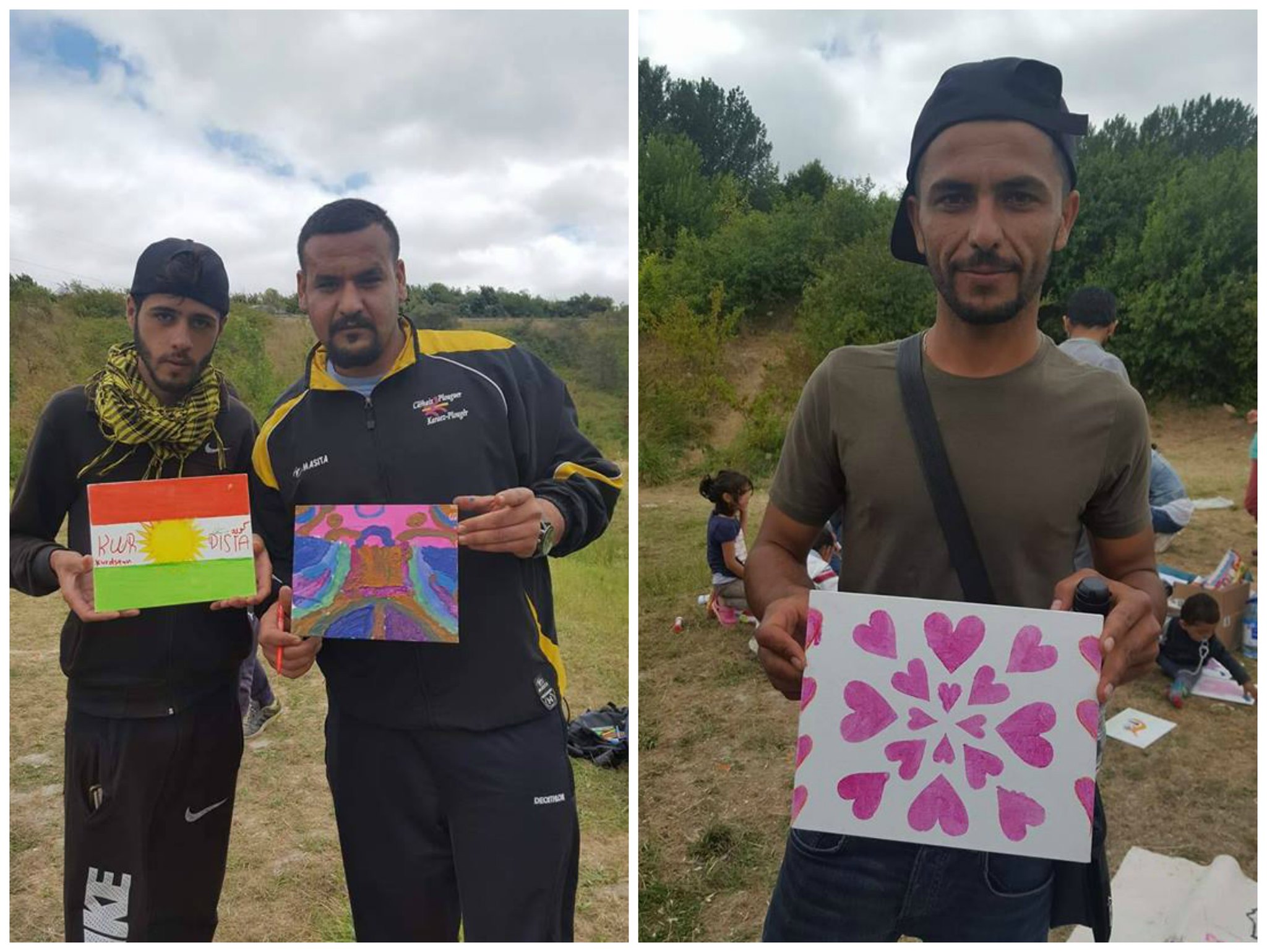 When interest in painting was lost (and the wind got worse) we got out the skipping rope and had a laugh with the kids. One of the girls in the camp wanted to show us her family so she took us through the woods to go visit the camp where her sisters were staying. It’s heartbreaking but still, they had a smile for us. 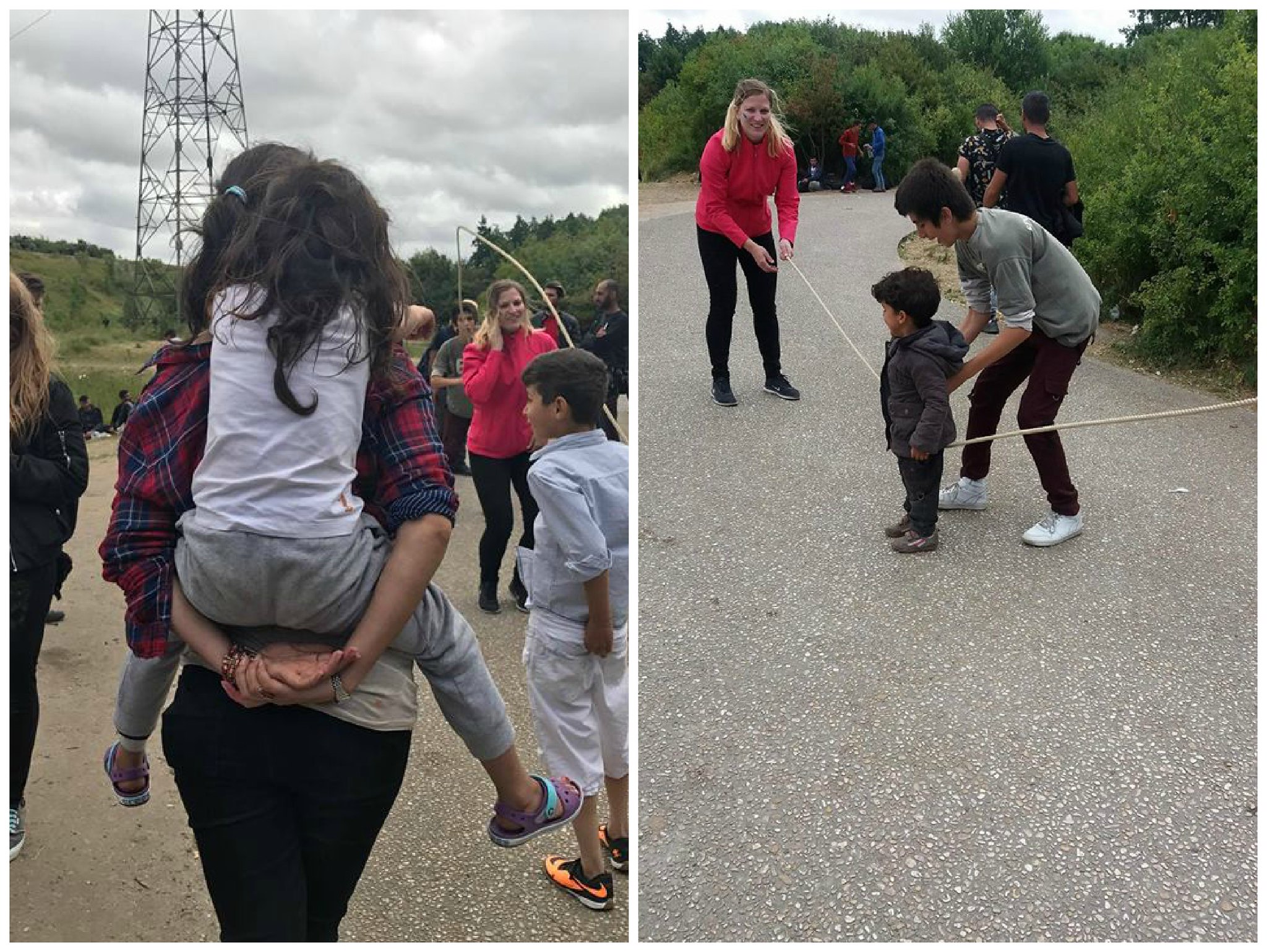 I returned home feeling happy to have been able to do at least a bit for people in distress but also with a heavy heart, knowing that there is still so much that could be done and it’s beyond my own powers and ability. On the drive back we were all tired and quiet for most of the time, so I had a bit of time to think about what I had just experienced. It made me feel emotional at one point, to think that we had to leave them all behind and just get in the car and go back home because we were lucky to win the nationality lottery. It is sad to think that one day this could be any of us if the world continues to go down its current route. According to Foreign Policy, the levels of human conflict are still at an all time low, but considering what we’ve been experiencing and seeing lately, who knows if it’s going to last? 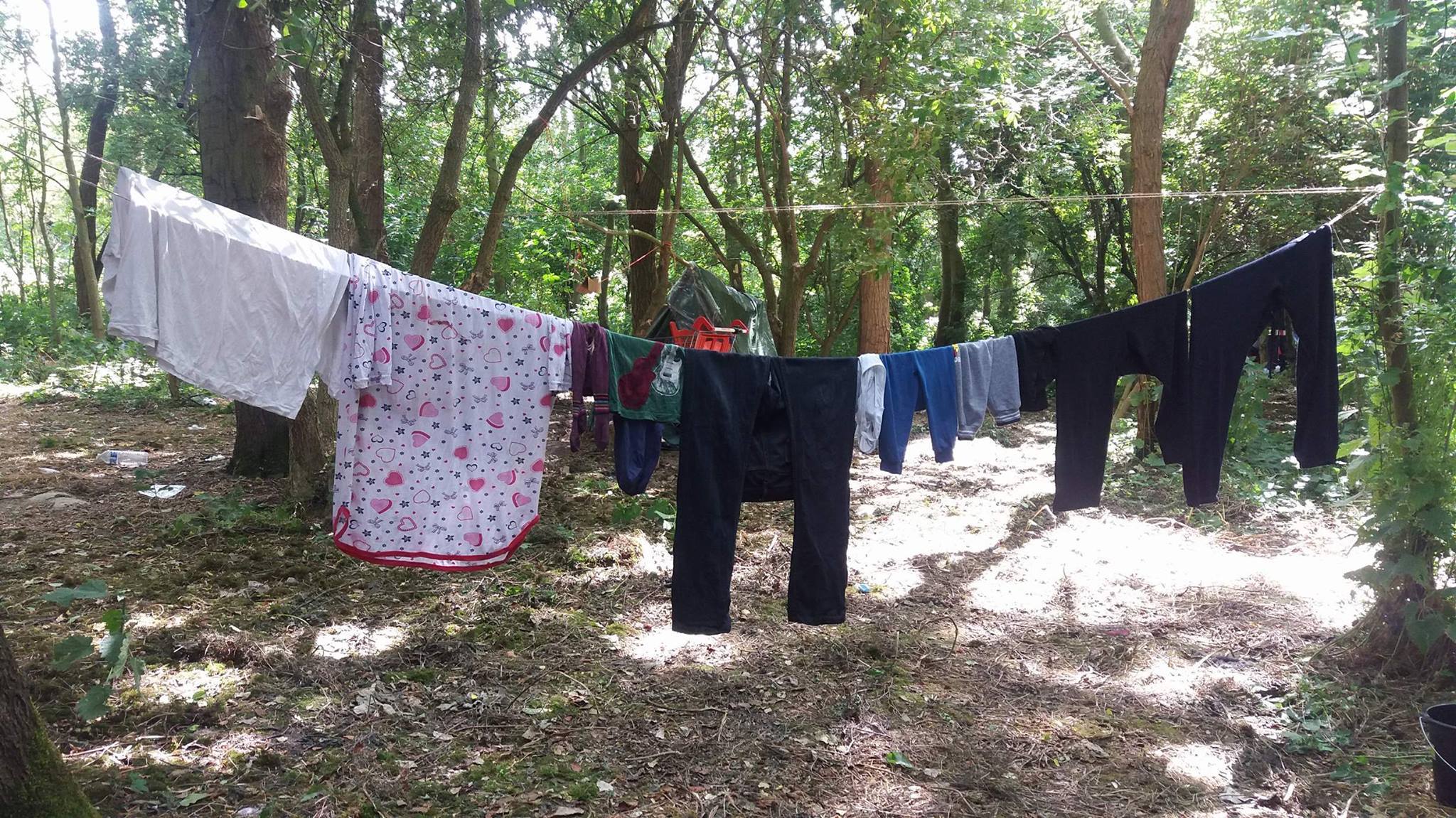 As a friend said to me, everyone should do this kind of volunteer work – it helps put the world and our priorities into perspective and most importantly, it makes a difference in other people’s lives. I am now hoping to be able to raise funds to go back again. Winter will come at one point and life will be even harder for them.

If you can’t come to the camps but would like to help the effort, please donate generously here.