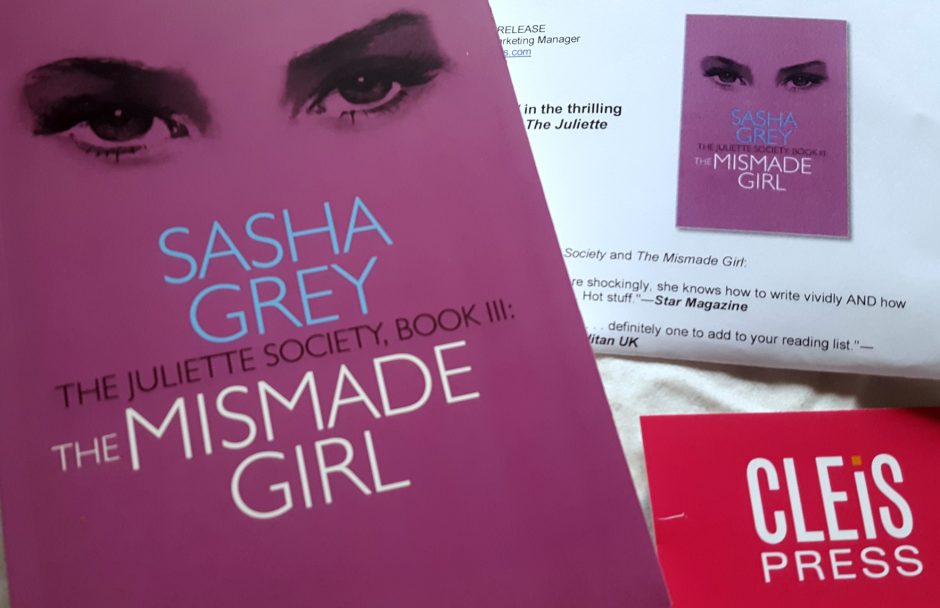 I believe that by this point Sasha Grey dispenses any further presentation – she is one of the few adult stars that made a transition into “mainstream” culture and doesn’t seem to have suffered from her previous career choices. (I am particularly fond of a music project she collaborated with, aTelecine).

If you’ve been reading my blog for long enough, you will know that this is not the first time that I review one of Ms Grey’s books. The first in the trilogy was called The Juliette Society and you can read my review here.

I have to confess that I didn’t get to read the second book in the series but the publisher Cleis Press was kind enough to send me a copy of the third and final title in the trilogy, “The Mismade Girl”. Don’t let this stop you from picking up this tome – there are enough references to the previous happenings for the story to make sense.

The main character of the series, Catherine, is now a well-known journalist who gets offered the scoop of her life by a powerful man, Mr X. I don’t want to give too much of the story away in this review so I’ll leave it at that. I will instead say that Ms Grey has a very fertile imagination when it comes to risque situations! Another aspect that I enjoyed about the book is how BDSM is portrayed – Ms Grey knows what she is talking about and has many reflections on it throughout the book. It’s inevitable not to mention the 50 Shades of Nonsense book, as unfortunately, it’s still the most popular book on the subject, that perpetuates a lot of misconceptions – even recently, a new film in the series came out and I didn’t bother to watch it but this review is not only hilarious but also says all you need to know about what is wrong with it.

Anyway and going back to the book at hand, I think that the author’s writing has matured and while there are still a lot of thought wanderings about all sorts of things like relationships, sex, etc, they didn’t feel as shoehorned in as much as in the first book. This was an enjoyable piece of erotica and a great read to make those intolerable commutes in London a little bit more tolerable.

To purchase your own copy of The Mismade Girl, go here.

Guest Post – How to Choose the Right University for You